One of the most popular game in casinos nationwide, video
poker enjoys a reputation as an easy way to get into casino gaming. Low cost to play, with huge payouts possible, and featuring a video display that's easy to understand and learn to play -- millions have played video poker and it appears millions more will soon join the growing number of video poker fans. How did this game that has become so popular worldwide begin?

Video poker is an amazing combination of slot machine technology, old-style card gaming, and modern computing. Although the first "poker machines" were invented in the late 19th century in Brooklyn, they were coin-operated machines that paid out little more than cigars or free drinks at the bar -- no computing, obviously, and easy to manipulate. These machines are barely similar to the computerized machines of today -- but how exactly is Video Poker different from other casino games?

Like slot machines, a video poker player inserts a unit of money (ranging from a nickel up to 5 dollars per hand or even more) and relies on a pull of a lever or the pressing of buttons on an interface to play. Both machines rely on random number generators -- but unlike a slot machine, however, a video poker machine relies on a special 52-card Random Number Generator (based on a 52-card deck) as in the kind used in a poker game. This means that player skill and strategy have a great impact on the outcome of a video poker game, as opposed to plain old luck for the slot-style machine. In video poker, the odds of getting a certain card are equal to the same odds for a traditional poker game.

And speaking of poker games, how exactly is video poker different from the traditional table game? Like a table game, video poker players must rely on strategy and knowledge of the various hand rankings to win. Unlike traditional table-based poker you have no opponent except for yourself. There's no bluffing necessary, in fact there's no one to bluff, and your winnings depend entirely on you making the best hand out of the cards you've dealt -- remember, best possible hand equals best possible payout.

Video poker games are known by names (Jacks or Better, Deuces Wild, etc.) which help the player understand what kind of odds and payouts they're playing.

Jacks or Better, probably the most common game you'll find, 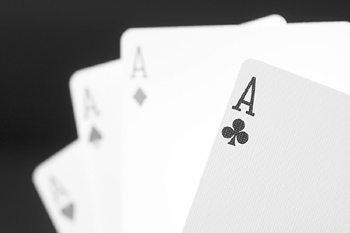 Full pay Jacks or Better has (theoretically) a return of 99.54% when played perfectly.

Deuces Wild is a video poker game offering an amazing potential payout of 100.76%, as always if you play it perfectly. This is a variation of video poker where all twos are wild. This means they substitute for any other card in the deck -- ideally you use this to form a better hand. Deuces Wild machines can be found with pay schedules that offer returns as high as the ridiculous number mentioned above, but only when played to perfection. It is also available with other pay schedules that have lesser theoretical returns, you just have to check the machine.

There are many varieties of video poker -- like Jokers Wild for instance -- where possibilities like 5 of a Kind and Joker Flush exist -- big payouts for strange-sounding hands that might get you in trouble during a traditional game. Other varieties to be found include Bonus Poker (a variation of Jacks or Better), Anything's Wild, Double Double, Double Bonus -- they are all variations on the same theme, and once the basic strategies of video poker are learned, they can be applied to any video poker game.

Certain video poker games are referred to as "full pay" -- this means they have the best payout schedule for that particular video poker machine. An example of this would be "Full Pay Jacks or Better" -- the "full pay" in the title indicates that this machine pays out 9 units for a full house and 6 for a flush, as opposed to 8 units for full house and 6 for flush on other identical machines. It also meands the maximum average payback on said machine will be near or above 100%. Hence, a "full pay Jacks or Better" machine will offer a better average payback than a non full-pay machine.

As for Deuces Wild, the full pay version here might be the best deal in video poker. As I've mentioned before, on the full pay machine it is possible to play above 100.75% potential payout. As these machines are understandable hard to come by, being such big cashcows for serious players, there's another version called NSUD, or "Not So Ugly Duckling" Deuces Wild -- name coined by video poker expert Skip Hughes. This machine, though not as lucrative as the over 100% version, offers up to a 99% payout.